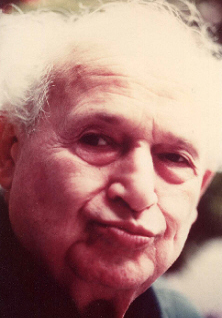 Moshé Feldenkrais, DSc, was a distinguished scientist and engineer whose career included work at the Curie Institute in the 1930s. He earned his DSc in physics from the Sorbonne, was a black belt Judo master, and went on to develop The Feldenkrais Method which is now practiced all over the world.

Here is what he often said:

“You cannot increase your sensitivity unless you reduce the effort.”

“If you know what you are doing you can do what you want.”

“Elegance is defined as the use of the exact amount of energy to fulfill the function – no more, no less.”

Speaking about belief systems and the reorganization of the nervous system, Moshe described a seventy year old man who came to him whose mother had told him for seventy years to “stand up straight” and for seventy years he couldn’t do it, because his belief system didn’t allow him to listen to his own experience of himself. Moshe spoke of the millions of people who believed that the earth was flat and they could drop off it, until Columbus “followed his own nose” and discovered America.

“At the time of the injuries it seemed to me a wild idea to even consider it possible to effect a change in an anatomical structure through an alteration in the functioning of the brain, which involves negligible energy compared with one in the skeleton.”
– Moshe Feldenkrais
(This idea is the foundation of his method, which is the re-education of the nervous system.)

A young woman named Sarah Rosinsky who had cerebral palsy came to Moshe in 1976. Sarah was in my class in the second Feldenkrais Training of 250 students which took place for ten weeks every summer at Hampshire College in Amherst, Massachusetts and which was completed one year before he died in 1984. Sarah had at that time had her second child and had come to me for Ericksonian hypnotic work to help her with her anxiety and shyness about speaking on cerebral palsy to large groups of people. A woman of quick intelligence and marvelous insight, Sarah, now a Feldenkrais practitioner in California, feels that she is uniquely qualified to help others.

She told me, “Even though I observed remarkable improvement in my speech and gait, Moshe never mentioned my physical progress as a goal in itself. Rather he loved my expanded life: that I became pregnant, that I tackled starting a family and being trained in the work simultaneously. He saw improvement only in terms of the effect on living. For him, these physical gains were secondary to the improved functioning that his work brought about. Freedom and choice were his issues. It puts the whole subject of rehabilitation on quite a different level. It allows someone with cerebral palsy to teach a dancer how to move. One of my “disabled” students asked me if I worked on the “able-bodied” and I said, “Who is able-bodied? I don’t know anymore.”

(From “The Feldenkrais Method: A Dialogue with the Human Nervous System,” by Jane A. Parsons-Fein)